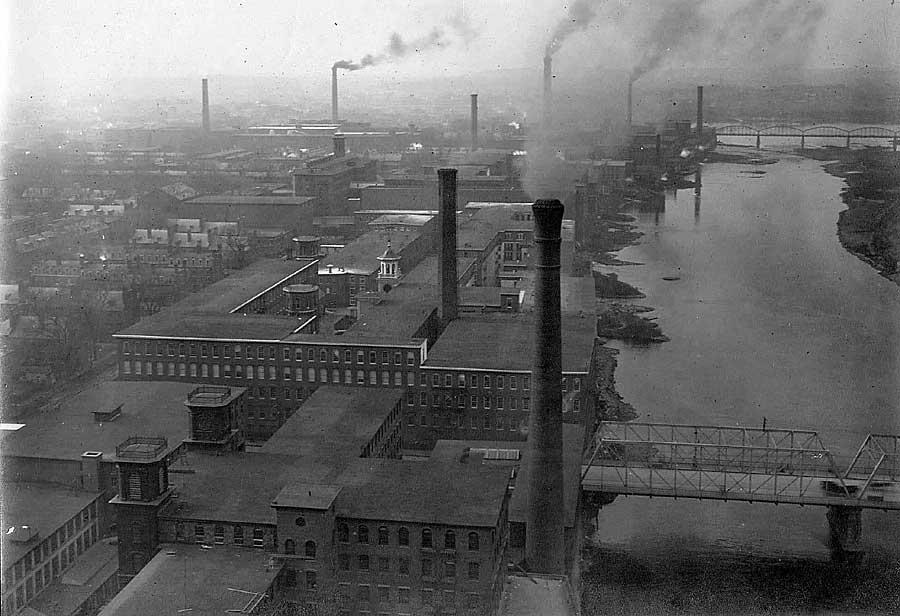 Our new location in Woonsocket RI is in what used to be the “Alsace Worsted Mill”, built more than 100 years ago by Joseph Guerin. Guerin had worked in textile mills in Belgium and Italy before coming to Woonsocket in 1892. In addition to the Alsace Mill, Guerin built four other mills. The building we are in has many of the original structural elements still in place.Textile mills have a long history in New England. The first “modern mill” – modern for its time – was built in the early 19th century, in Lowell, MA. This is marked by some as the beginning of the industrial revolution in America.  Lowell, MA was founded in the 1820’s

The three modes of operation for hand-held adhesive cartridge dispensing guns are: manual, pneumatic and battery. Dispensers are chosen to meet the particular needs for a given application. For low to moderate viscosity adhesives where a modest rate of dispensing is required, the manual dispenser will be adequate. In cases of higher viscosity materials and/or the need to dispense large quantities of material, or dispense material rapidly, a pneumatic dispenser is ideal. Pneumatic dispensers, which require a source of compressed air, are ideal for “indoor use” – from a manufacturing plant to small shops. Outdoor use is also possible if compressed air is available from a portable or truck mounted unit.

What happens if compressed air is not available? In this case a battery provides the energy to the plunger which presses down on the cartridge pistons, and thereby dispenses the adhesive. This unit has advantages even if compressed air is available in an indoor setting. Pneumatic dispensing guns are “tethered” to the air source and can’t always reach the point of adhesive application. In this case, the portability of a battery operated unit solves the problem.

Sulzer COX has a line of battery operated dispensers for one component cartridges. The COX ElectraFlow Plus Cartridge is a heavy duty 18V lithium-ion battery powered dispenser which is designed for use with medium-high viscosity sealants and adhesives. It is used for dispensing one-component 310 ml cartridges.

Images and data below are for the 83010 – Bradford 300 dispenser. Other models are available. For information email us at cox_battery_dispensers@brandywine.tc

Test of video posting directed to Facebook. This video is an overview of the 'adhesives universe'.

The Importance of Using a System that Fits the Job!

Very often a manufacturing business will try to save money without careful considering all the factors involved. An example could be found in the manufacture of complex electronic circuitry, that utilizes an epoxy adhesive. Often in this kind of situation, the potential savings of using a lower grade of adhesive, or inexpensive  dispensing equipment, is far outweighed by the cost of a ruined finished product.

Take this case for example, pictured below. This manufacturer tried to save money by using a qualtiy static mixer with a very low end, low cost dispensing system. Needless to say, productivity was low and the reject rate of finished parts was high.

In any event, a picture is worth a thousand words!

Had this manufacturer called us, we undoubtedly would have recommend an A-System 50 ml cartridge along with a precision made DMA 51 series dispensing gun.

Welcome to our new adhesive dispensing gun website. In future articles, we will be discussing the various types of dispensers we sell. These include Sulzer Mixpac, Sulzer COX and MK (Mixpac Kroger). The product list includes one- and two-part cartridges dispensers in a wide range of volumes and ratios. The mode of use includes manual, pneumatic and battery operated. We'll also discuss applications for dispensing guns, and devote one or two articles to Corian and Solid Surface Installation, which is a very popular use for dispensing guns.

Just a short note - our company will be moving to a new facility in about 6 weeks - details to be forthcoming shortly. The new facility is located in one of those classic mill buildings that dot the landscape in New England. You can spot many mills along or near the banks of the Merrimack River in Massachusetts. The first advanced textile mill, located in Lowell MA, signaled the coming of the industrial revolution to the America.

The new location will double the size of our warehouse, and allow for expansion to accommodate the rapid growth of the company. We look forward to continue providing our great customer service and helping customers solve technical problems related to adhesive applications. We'll continue selling both Sulzer Mixpac and Nordson static mixers, cartridges and dispensing guns, as well as accessories.

Thank you loyal, and new customers! The first person to email us at admin@brandywine.tc will receive a free epoxy evaluation kit consisting of a 50 ml dispensing gun, two 50 ml cartridges and 4 static mixers (2 each of 2 different styles). Send your email to blog_expoy_kit@brandywine.tc

Before the advent of sophisticated mixing systems for two part materials, such as adhesives and sealants, mixing and dispensing was done with whatever simple methods were at hand - and sometimes literally it was the hand - fully immersed in the bucket - that did the mixing.

Sulzer Mixpac holds many patents for sophisticated two component materials mixing systems. A "system" is composed of a dual cartridge which holds both components in separate "cylinders", a dispensing gun and a static mixer. The dispenser has two rods with discs on the ends, that press down upon the cartridge pistons.Material is forced through the static mixer.

Sulzer static mixers are composed of a housing and mixing elements. Mixing elements are a series of baffles which break up and combine the two streams of material many times over, ultimately producing a homogenously mixed material which exits at the outlet. Sulzer Mixpac static mixers come in many different configurations.

Important static mixer variables include: inner diameter, length, number of mixing elements and geometries of the housing and mixing elements. Mixpac mixers have either a cylindrical or "square type" housing. Elements can be of various spiral configurations for cylindrical housings, or interlocking baffles for the square type housing. Mixers are made with several different plastic resins - polypropylene,polyacetal, polyester and nylon are the most common.

So, if you are dispensing materials in a similar manner used by Jackson Pollock to creat his artwork, you should consider contacting us to discuss your adhesive mixing and dispensing requirements. Please contact admin@brandywine.tc

By accepting you will be accessing a service provided by a third-party external to https://brandywinedispensers.com/